posted by Gwendolyn Pastor | 19sc
April 19, 2017
In May, CAHS will release our Annie E. Casey Kids Count Report, which analyzes how place and race influence how children and families fare, looking at data based upon geographic location and race. In order to do this, CAHS used data samples from five Public Use Microdata Areas (PUMAS) in Connecticut. 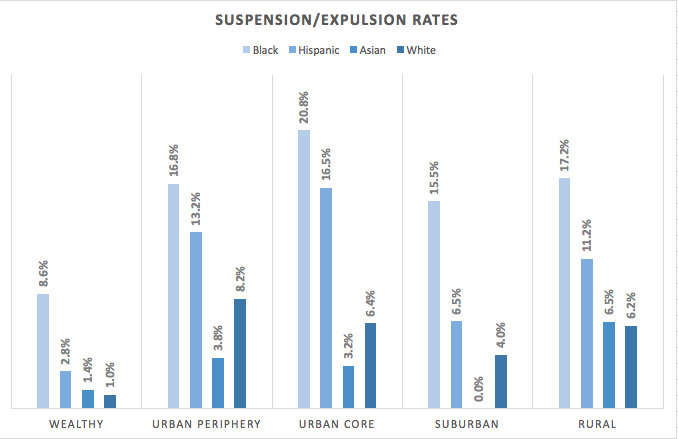 Suspensions are associated with negative student outcomes such as lower academic performance, failure to graduate on time, decreased academic engagement, increased future disciplinary action, and higher dropout rates.36 Adolescents who are not attending school (including those given out-of-school suspension or expulsion) have also been found to have a higher likelihood of engaging in behavior with significant health risks, including illicit drug use and unsafe sexual behavior. Numerous studies have found that students of color, particularly Black students, are disproportionately likely to be suspended or expelled. From the available data, it appears that suspension and expulsion rates, like Chronic Absenteeism, bear a strong correlation to the PUMAs’ overall economic standing. Collectively, schools in the wealthier PUMAs have lower suspension and expulsion rates across the included racial and ethnic groups, while the poorer PUMAs’ rates are far higher.

However, racial variations within the “Five Connecticuts” are especially striking: Black students are suspended and expelled at rates far in excess of the other racial and ethnic groups, especially White and Asian students. The proportion of Black students in a given student body is seemingly irrelevant: Black students comprise roughly one third of the student body in the Urban Core, and less than two percent of the Suburban or Rural student bodies. Yet, they are suspended at almost four times the rate of White students in the former setting, and at three times the rate of White students in the latter two. Given the relative similarity in Black and White median household incomes in these three “Connecticuts,” the observed differences are unlikely to reflect differences families’ relative socio-economic status alone. While overall rates seem to vary by place, the often-extreme racial variations persist across PUMAs.

Hispanic children’s rates, while higher than Whites’, appear to be far more sensitive to place (and perhaps economics) than Black students’ rates. Hispanic students’ suspension and expulsion rates are closer to Blacks students’ rates in the poorer Urban Core and Urban Periphery areas, and are more comparable to Whites’ in the Wealthy and Suburban areas.

Stay tuned for more details of the release in the coming weeks!